Stuck on an issue?

Lightrun Answers was designed to reduce the constant googling that comes with debugging 3rd party libraries. It collects links to all the places you might be looking at while hunting down a tough bug.

And, if you’re still stuck at the end, we’re happy to hop on a call to see how we can help out.

Use Markdown to represent rich text

Currently, there are some oddities with the way the API represents rich text fields, such as spell descriptions. The present strategy is to separate paragraphs into their own strings, as items in an array. This is practical for rendering - for each over the array, and produce a <p> tag for each string (or your stack’s equivalent); however, this approach is severely limiting when it comes to complex mark-up, such as tables, subheadings, etc.

Compliance with this approach leads to some interesting formatting in the API’s data. For example, the spell scrying has two tables, in the source: 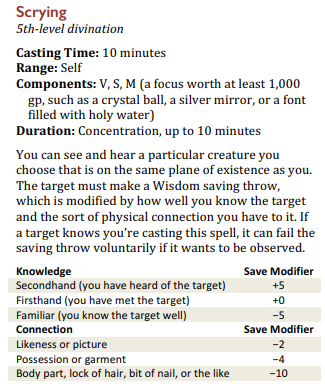 Whereas the format given in the API is distant from the source, and carries no information about emphasis, where tables begin and end, and treats table rows as distinct paragraphs:

If we replace arrays of strings with single strings that follow a markdown standard, we’ll be able to represent entities like tables with far greater ease. We would have to choose a single markdown flavour, for consistency. GitHub Flavoured Markdown (GFM) is a solid choice; it is used widely, we already write our PRs and Issues with it, it is compatible with the majority of markdown parsers across various languages, and encompasses most (if not all) of the mark-up required to faithfully replicate the formatting in the SRD.

The issue is that we are making assumptions about how a developer wants to display the data. Including markdown that turns the data into tables assumes the developer wants the table, not just the data. For instance, someone using the api to make a data driven application may want those data in a drop down instead (generally, not specifically for the example provided), now they are left with trying to strip out the markdown.

We are definitely trying to make all the data themselves in structured data, but we can’t yet. But the text is part of the SRD, and we write it down as part of the desc field. So we basically have two things here: the textual representation and the extracted data.

To be clear, we should have both the data and a textual representation. We come from the text and are migrating towards the data, piece by piece. Transforming the text into markdown doesn’t invalidate the fact that at some point in the future, we want to have a data form of the text.

My take is “don’t reinvent the wheel”.

Markdown is popular and well known and works well in a variety of different contexts.

desc is just a text field. There’s no reason to have it split on lines. If anything, it’s just a faulty design to do so. So there should be if not linebreaks at least \n in it.

If we want to reflect the metadata that is the structure of the description, the text field should contain some markup language. Given the popularity of markdown as well as the readability of it, I strongly suggest using it.

Any attempt to make our own markup language is flawed. @scarabdesign’s idea introduces a new level of complexity both for the user and the writer, and overall makes everything less readable.

Top Results From Across the Web

What is Markdown? A beginner's guide to Markdown and Rich ...
Rich text is a formatting type that gives authors a wide range of formatting options. It gives editors the power to design how...
Read more >
Markdown vs. Rich Formatting - Who Will Win the Ultimate ...
Rich Text : “I don't like blank lines, useless spaces or hashes. Instead, write a heading or paragraph, and assign the corresponding paragraph...
Read more >
Why I Choose Markdown Over Rich Text Editor to Write My ...
This article's going to cover some of the top reasons that I love using Markdown syntax for note-taking. Reason #1: Quick Capture of...
Read more >
Markdown in JavaScript RichTextEditor control - Syncfusion
Rich Text Editor supports markdown editing when the editorMode set as markdown and using both keyboard interaction and toolbar action, ...
Read more >
Markdown vs. Rich Text: How do you prefer to write? - Capiche
Markdown all the way. It allows you to save time by keeping all fingers on the keyboard and you don't have to click...
Read more >