Stuck on an issue?

Lightrun Answers was designed to reduce the constant googling that comes with debugging 3rd party libraries. It collects links to all the places you might be looking at while hunting down a tough bug.

And, if you’re still stuck at the end, we’re happy to hop on a call to see how we can help out.

I’m currently developing a custom crash report dialog, and I want it to be a full-screen dialog, as shown below: 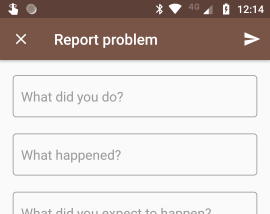 I’ve extended BaseCrashReportDialog, and I need to add the “X” in the top-left corner and the “Send” button in the top-right corner. I am using the following code:

However, I cannot call getSupportActionBar() because the base class doesn’t extend AppCompatActivity. As a result, I cannot put an “X” in the top-left corner in a way that works on all OS versions.

I can think of a few ways to deal with this:

Edit: actually I ended up deciding not to go ahead with ACRA (due to GDPR), but I’ll still leave this issue open in case you’re interested.

I think I’d prefer to allow any activity as dialog, and encapsulate all logic in BaseCrashReportDialog in a POJO.

There are no sources in the repository for it, as this “Class [is] generated based on AcraDialog”

Top Results From Across the Web